Here are some updated pics from our fig farm's winter operation.  The first pic shows the progress we're making on a 2nd 'grow room' area.  All of the grow lights in this area should be operational by late tonight or tomorrow: 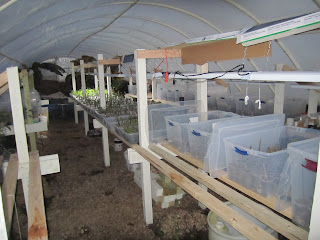 The rest of the pics are from a neighboring tunnel that already has grow lights wired up.  The newly rooted baby trees are flourishing under the grow lights, and the established trees in 3gal pots that had previously slipped into dormancy are breaking out now, too: 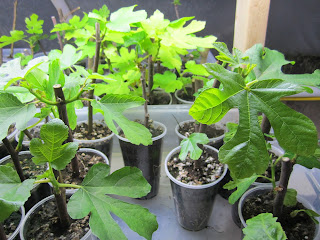 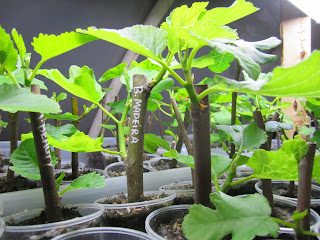 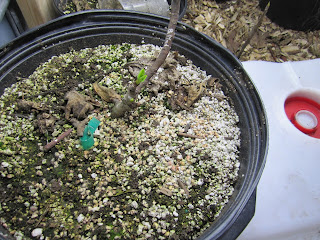 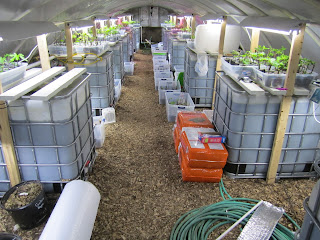 Yesterday I checked on the 1,200 3gal trees that are overwintering in some other tunnels, and they were all alive and well.  They have all slipped into dormancy now, but with temps soaring into the 50F-55F range outside over the next week, I suspect they're going to start waking up very soon.  When they do, they will grow very fast, and should yield a large crop of air-layers (and some hardwood cuttings below the air-layers) by sometime in March.  Those air-layers, along with the thousands of rooted cuttings that we're growing right now, should be enough to cover the large majority of trees that have been pre-ordered.  So as soon as it gets warm enough to start shipping trees this spring, there will be a lot of boxing and shipping going on.

It should be noted, though, that there are some varieties that were in especially high demand and have been slow growers.  These will be delayed beyond March (possibly until late summer?) and include:

If you have a chance to get any of those varieties at a good price from another trusted source, I would urge you to do so.  All of those varieties are worth having more than one of, so if you can get a good deal on any of them, I'd jump on it.  Then when our trees arrive at your door, you'll already have backups of some of the best (and most expensive!) varieties.

Regarding cuttings:  in an effort to save tons of soft green wood that is usually lost, I am pursuing a strategy of air-layering just below the lignified/green boundary.  The goal is to save all of the green wood by having it remain as the top of the air-layered tree after it is separated from the mother tree, and to then be able to harvest lignified cuttings from the mother tree beneath where the air-layer was removed.  This means that many cuttings won't be able to be harvested until the air-layers can be removed in March.

Cuttings season was further complicated by the fact that our trees slipped into dormancy at many different times due to having about 6 or 8 different types of environments (outdoor versus indoor; heated tunnels versus unheated tunnels; pit greenhouses versus above-ground greenhouses).  Since all cuttings have to be ready at the same time for them to be shipped out together in orders, and since I want all cuttings to be fresh when they're shipped, the options were to either leave them all on the trees (where they could be damaged, depending on the environment), to prune and refrigerate them (which contradicts my desire for freshness), or to prune them and plow them back into the propagation operation.  I decided on the last option because it seemed like a good way to save and create more wood while still preserving the original cutting; that is, once the green top of the resulting rooted tree is air-layered off, the original lignified cutting (now a baby tree trunk) can be reclaimed.

Some people who live in exceptionally hot areas have asked that I send their trees right now so that they can get established in-ground before the intense heat arrives and kills them.  Most of these trees aren't ready yet, though, and the ones that are maybe ready are still tiny and would probably get beaten down by the elements if they were planted outside right now.  Since it may be too hot to plant the trees later this spring/summer, I am open to the option of growing the plants here for those people, and then shipping the resulting bigger trees later in the season if the person is willing to pay the extra shipping cost involved with shipping bigger trees.
Posted by me at 10:53 AM 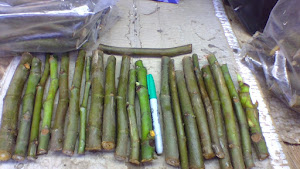